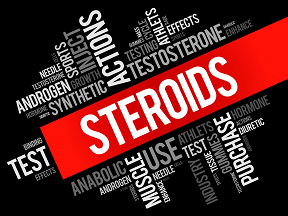 What are anabolic steroids?

Anabolic steroids are medications related to testosterone (male sex hormone) that are made in labs. Doctors use anabolic steroids to treat hormone problems in men, delayed puberty, and muscle loss from some diseases.

Bodybuilders and athletes might misuse anabolic steroids in attempts to build muscles and improve athletic performance, often taking doses much higher than would be prescribed for a medical condition. Using them this way, without a prescription from a doctor, is not legal—or safe—and can have long-term consequences.

Anabolic steroids are only one type of steroid. Other types of steroids include cortisol, estrogen, and progesterone. These are different chemicals and do not have the same effects.

How Anabolic Steroids Are Misused

When people take steroids without a doctor’s prescription or in ways other than as prescribed, it is called misuse.

Some people who misuse steroids take pills; others use needles to inject steroids into their muscles or apply them to the skin as a gel or cream.

What happens to your brain when you misuse anabolic steroids?

Anabolic steroids affect a part of the brain called the limbic system, which controls mood. They don’t cause a “high” like some other drugs, but can cause harmful effects.

Long-term steroid misuse can lead to aggressive behavior and extreme mood swings. This is sometimes referred to as “roid rage.” It can also lead to feeling paranoid (like someone or something is out to get you), jealous, delusional (believing in something that is not true), and invincible (like nothing can hurt you).

People who misuse anabolic steroids can experience many effects, some of which are serious:

In addition, people who misuse steroids by injecting them risk getting HIV or hepatitis (a liver disease) if they share needles. Read more about the link between viral infections and drug use.

Some people who misuse steroids believe they can avoid unwanted side effects or increase the drugs’ effects by using them in specific ways, sometimes called cycling, stacking, or pyramiding. There is no scientific evidence that any of these approaches reduces the harmful effects of misusing these drugs.

Can you overdose or die if you misuse anabolic steroids?

Yes. Although it is rare, there are a few ways steroid misuse can cause death.

Mixing steroids with other drugs, including alcohol, can be especially dangerous.

They can be. Addiction to steroids is different than addiction to other drugs, such as cocaine or heroin. People who misuse steroids don’t experience a “high” from the drug. However, they can experience withdrawal symptoms if they stop using them.

People who do become addicted keep using steroids despite bad effects on their bodies and lives. Also, people who misuse steroids typically spend a large amount of time and money obtaining the drugs, another sign they could be addicted.

When they stop using steroids, people can experience uncomfortable symptoms, including:

Depression can be very dangerous, because it sometimes leads people to think of or attempt suicide (killing themselves). Some symptoms of depression that are linked with anabolic steroid withdrawal have lasted for a year or more after the person stops misusing the drugs.

How many teens misuse anabolic steroids?

While it’s usually adults who misuse steroids, a small number of teens misuse them, often in an attempt to improve athletic performance.

The chart below shows the percentage of teens who misuse steroids.

Swipe left or right to scroll.

Get Your Teen Screened for Depression
Scroll to top