Heroin is a very addictive drug made from morphine, a psychoactive (mind-altering) substance taken from the resin of the seed pod of the opium poppy plant. Heroin’s color and look depend on how it is made and what else it may be mixed with. It can be white or brown powder, or a black, sticky substance called “black tar heroin.”

Heroin is part of a class of drugs called opioids. Other opioids include some prescription pain relievers, such as codeine, oxycodone (OxyContin), and hydrocodone (e.g. Vicodin).

Heroin use and overdose deaths have dramatically increased over the last decade. This increase is related to the growing number of people misusing prescription opioid pain relievers like OxyContin and Vicodin. Some people who become addicted to those drugs switch to heroin because it produces similar effects but is cheaper and easier to get.

In fact, most people who use heroin report they first misused prescription opioids, but it is a small percentage of people who switch to heroin. The numbers of people misusing prescription drugs is so high, that even a small percentage translates to hundreds of thousands of heroin users.1 Even so, some research suggests about one-third of heroin users in treatment simply started with heroin. Maybe they were mistakenly told that only one use cannot lead to addiction. Both heroin and opioid pill use can lead to addiction and overdose.

How Heroin is Used

Heroin is mixed with water and injected with a needle. It can also be sniffed, smoked, or snorted. People who use heroin sometimes combine it with other drugs, such as alcohol or cocaine (a “speedball”), which can be particularly dangerous and raise the risk of overdose.

To learn more about the different types of opioids, visit our Prescription Opioids Drug Facts page.

1 Compton WM, Jones CM, Baldwin GT. Relationship between nonmedical prescription-opioid use and heroin use. The New England Journal of Medicine 2016;374:154-163.

What happens to your brain when you use heroin?

When heroin enters the brain, it attaches to molecules on cells known as opioid receptors. These receptors are located in many areas of the brain and body, especially areas involved in the perception of pain and pleasure, as well as a part of the brain that regulates breathing.

Short-term effects of heroin include a rush of good feelings and clouded thinking. These effects can last for a few hours, and during this time people feel drowsy, and their heart rate and breathing slow down. When the drug wears off, people experience a depressed mood and often crave the drug to regain the good feelings.

Regular heroin use changes the functioning of the brain. Using heroin repeatedly can result in:

What happens to your body when you use heroin?

Opioid receptors are located in the brain, the brain stem, down the spinal cord, and in the lungs and intestines. Thus, using heroin can result in a wide variety of physical problems related to breathing and other basic life functions, some of which may be very serious. Here are some ways heroin affects the body:

When mixed with alcohol, short-term effects can include:

In addition to the effects of the drug itself, heroin bought on the street often contains a mix of substances, including the dangerous opioid called fentanyl. Drug dealers add fentanyl because it is cheap, and they can save money. Some of these substances can be toxic and can clog the blood vessels leading to the lungs, liver, kidney, or brain. This can cause permanent damage to those organs.

Also, sharing drug injection equipment or engaging in risky behaviors can increase the risk of being exposed to diseases such as HIV and hepatitis.

Can you overdose or die if you use heroin?

Yes, because heroin can slow and even stop a person’s breathing. This is called a fatal overdose. Deaths from drug overdoses increased from the early 1990s through 2017, fueled by increases in misuse of prescription opioids and, more recently, by a surge in heroin use. Nearly 15,000 people died from heroin overdoses in 2018 (the latest year for which data is available). The good news is that among young people ages 15 to 24, heroin overdoses decreased by more than 20 percent between 2017 and 2018.2

Signs of a possible heroin overdose are:

People who are showing symptoms of overdose need urgent medical help. A drug called naloxone can be given to reverse the effects of heroin overdose and prevent death—but only if it is given in time. It’s available in an easy-to-use nasal spray or autoinjector. Naloxone is often carried by emergency first responders, including police officers and EMTs. In some states, doctors can now prescribe naloxone to people who use heroin or prescription opioids so they or their family members can have them available to use in the event of an overdose, without waiting for emergency personnel (who may not arrive in time). Read more about how naloxone saves lives.

Yes, heroin can be very addictive. In 2016, about 626,000 in the U.S. had a heroin use disorder. That means they had serious problems with the drug, including health issues, disability, and problems meeting responsibilities at work, school, or home. Of the people with heroin use disorder in 2016, only 1,000 were teens (ages 12 to 17) and 152,000 were young adults (ages 18 to 25).3 This suggests that once teens leave home or high school, they are more likely to start using heroin.

Heroin enters the brain quickly, causing a fast, intense high. Using heroin repeatedly can cause people to develop tolerance to the drug. This means they need to take more and more of it to get the same effect. Eventually they may need to keep taking the drug just to feel normal. For those who use heroin over and over again, addiction is more likely. Once a person becomes addicted to heroin, seeking and using the drug often becomes the main goal guiding their daily behavior.

When someone is addicted to heroin and stops using it, he or she may experience extremely uncomfortable and painful withdrawal symptoms, which is why it is so hard to quit. Those symptoms typically include:

Fortunately, treatment can help an addicted person stop using and stay off heroin. Medicines can help with cravings that occur after quitting, helping a person to take control of their health and their lives.

How many teens use heroin?

Heroin is used mostly by adults. Although its use is rather low, the number of people starting to use heroin has been steadily rising since 2007.4 The greatest increases appear to be in young adults age 18 to 25. In contrast, heroin use has been declining among teens age 12 to 17.5

For more statistics on teen drug use, see NIDA’s Monitoring the Future study. 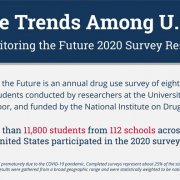 Surge of teen vaping levels off, but remains high as of early 2020
0 replies

How do drug overdoses happen?
Scroll to top